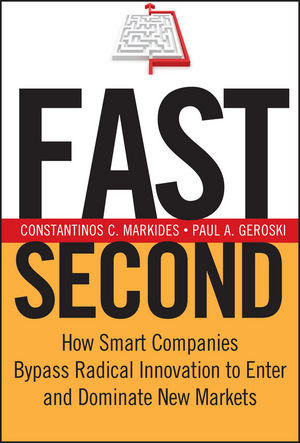 It is not often that you find a business book that really seems to be saying something new about business strategy but this book is clearly in that category. It is also much easier to read that most business books of the academic variety and this is mainly because it is laced with convincing examples that strengthen the fundamental argument.

This argument is that the whole concept of ‘first mover advantage’ – the benefit of being first to market – is an illusion that is not justified by the empirical evidence. There is a caveat here – that this only applies to what the authors call ‘radical innovations’, those that cause major change in the behaviour of consumers and have a disruptive impact on the market.

The authors – both from London Business School – also provide a convincing reason for this phenomenon and lots of evidence to prove that it happens. Their view is that the skills, structures and company cultures that are necessary to produce radical innovations are not the ones that can launch them onto the mass markets that are necessary for full exploitation. They also argue that it is a fallacy to think that all you have to do is change your culture to develop both types of skills. They regard this as an impossible dream.

Their answer for major established firms is not to try to become first mover innovators but instead to adopt a ‘Fast Second’ strategy. That is to allow the smaller more innovative companies to do what they call the ‘colonizing’ – the discovery of the product and its initial testing; and then themselves to handle the transformation of the idea into a mass market opportunity – what they call ‘consolidating’. They quote many examples of successful consolidators who are wrongly believed to be colonizers – Apple with the I Pod, Amazon with on-line book sales, Gillette with the safety razor.

The book makes most of its key points in the early chapters and, though at 170 pages it is not long by many standards, the authors could probably have made the essential points in an even shorter text. It has a practical approach, attempting to ask and answer the key questions that face those who are looking to grow their markets through innovation; for instance, when should you and when do you make the move as a ‘fast second’ innovator? How do you scale up the market into critical mass? What skills, attitudes and processes are necessary in the colonizing and consolidating roles? What are the likely winning tactics and strategies?

The book is an essential read for strategists and worth a scan for those with a passing interest. I was impressed but also found myself asking the question which would be even more interesting and relevant to most managers – how far does the ‘Fast Second’ concept apply to non-radical innovations? Having heard about the high proportion of failed product launches and seen examples of first mover failures in many case studies used on MTP courses, we have often questioned the validity of the first mover advantage concept in a wider context. Maybe that will be the next stage of research and a new book of the future.