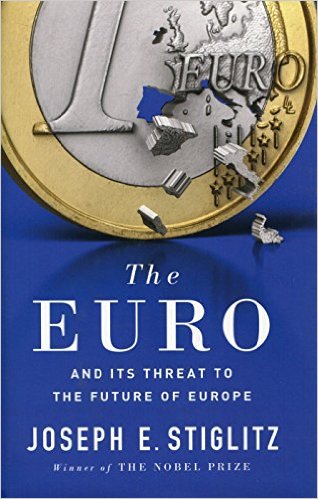 The Euro and its Threat to the Future of Europe by Joseph E. Stiglitz

A few weeks after the referendum on what has become known as Brexit I wandered into Waterstones bookshop in Cambridge and saw a large pile of copies of this newly published book.

As Economics was my subject at University I felt I had to read it. Although with 359 pages, excluding notes and the index, I expected it to be a daunting task.

I couldn’t have been more wrong.  It is a well-written and compelling argument against the policies that have been followed by the European Community.  Stiglitz, who has won the Nobel prize in Economics, argues that the Euro is doomed to failure, and will cause a huge amount of further economic misery before that happens, unless fundamental reforms are made.

The author could perhaps be best described as an interventionist or Keynesian economist.  He argues against what he calls ‘market fundamentalism or neo-liberalism’, the view that free markets will inevitably find the best solution.  He has a wonderful phrase about Adam Smith’s invisible hand, the idea that individuals’ pursuit of self-interest leads to the well-being of the entire society.  He argues that ‘it is invisible because it is not there.’

He believes that the Euro project was essentially a political project rather than an economic one and that this is the main reason for the problems that had followed its introduction.  The criteria that economists (including Robert Mundell, another Nobel prize winner) identified for a group of countries to share the same currency were not met.  Essentially the countries of the Euro are too diverse.

He is scathing about the impact of the Euro on the ‘dismal’ economic performance of the countries who joined it.

Figures for economic growth per capita between 2007 and 2015 show the following: 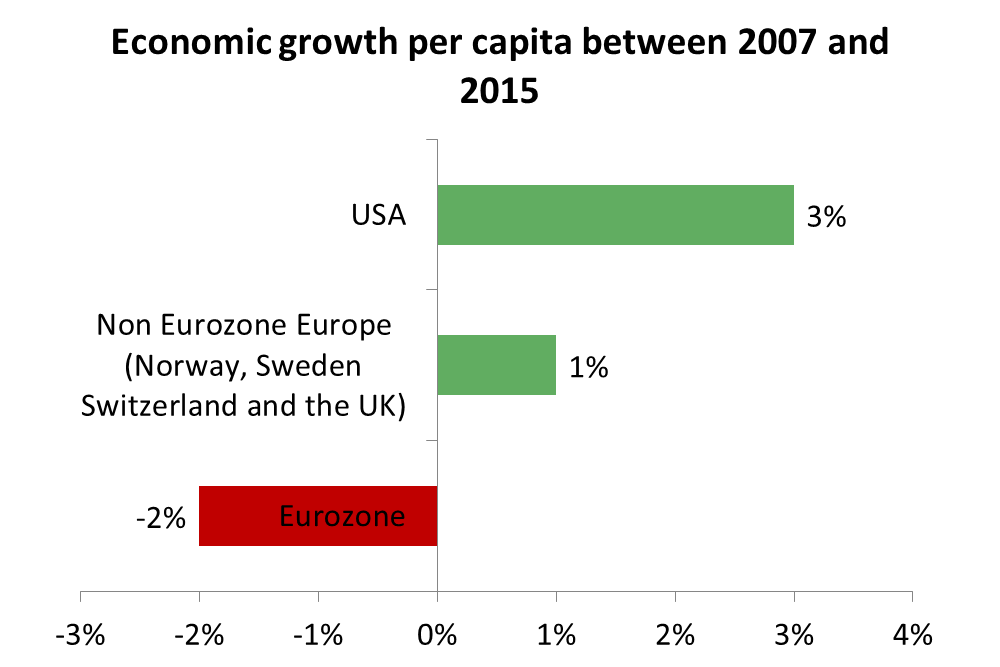 Only one country in the Eurozone (Ireland) has returned to pre-crisis levels of GDP.

The position of Greece was made far worse by the policies they were forced to adopt to try to combat the problems they experienced as members of the Euro.  In order to maintain full employment a country can adopt one or more of the following policies:

Once Greece had joined the Euro the possibility of the first two was not available.  The convergence criteria that Greece was forced to follow removed the third.  Stiglitz sees the continued lack of growth of their economy as no surprise, but rather a direct result of forced austerity.

There are three ways that he identifies whereby the Euro problem could be solved:

Making fundamental reforms that will allow it to work.

He argues that what is needed is fundamental reform; where the countries in the Euro become much closer together in the management of their economies including having a common banking system, mutualisation of debt, a common fiscal framework and a solidarity fund for stabilisation.

This would result in the Eurozone looking much more like a ‘United States of Europe’.

However, Stiglitz thinks it is unlikely that these reforms will be accepted by politicians running the EU.

Having an amicable divorce.

He argues that the best way to achieve this is for Germany, and possibly a few wealthier countries (possibly the Netherlands and Finland) leave and use a new currency.  This would allow the exchange rate of those remaining within the existing Euro to experience a devaluation.  The lower exchange rates would lead to an increase in their exports together with a reduction in their imports, thus leading to economic growth.  Basically, it is similar to what happened when one country leaves a fixed exchange rate system and their currency falls in value, as happened to the UK when it left the European Exchange Rate mechanism in 1992.

This could involve his proposal of a system of ‘marketable chits’ as a mechanism to ensure each country could decide whether to have a trade deficit or surplus.  Intellectually, this is interesting and the sort of thing that is studied by academic economists.  It seems highly unlikely that it would be accepted in the near future as a solution.

It is an excellent book and I recommend it unreservedly to anyone interested in the formation, management and the future of the Euro and, indeed, the European Community.