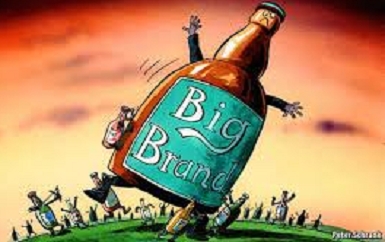 As I settle down towards the end of the holiday period (at least in the UK) a colleague has pointed out an article in The Economist of July 9th.  This is highly relevant to us as we will be running a programme in Finance for Senior managers of Unilever in September

The article ‘Invasion of the bottle snatchers’ is an analysis of the consumer packaged goods (CPG) industry.

The premise of the article is that the industry is changing.  In America large CPG companies lost nearly 3% market share between 2011 and 2015.  Smaller start-ups, such as KIND bars, or the Dollar Shave Club have been filling the gap.

The reason for the long standing competitive advantage of large CPG businesses is identified by The Economist as being more efficient manufacturing and high advertising spend.  We have long held the belief that while both are important the critical factor that has kept the large global leaders ahead is the high spend on advertising.

For example, if Coca Cola spend over $100 million to sponsor the Olympics, it represents a lower proportion of their sales than that of smaller companies (even if they are the size of Pepsi).  So the cost of sponsorship per unit (or can) sold is lower.  Like sponsorship traditional advertising (on TV for example) is a fixed cost, in the sense that it costs the same amount to run a campaign that will be seen by a given number of potential consumers however many sales you expect to generate.  The cost per unit of sales to the larger player is therefore lower giving a cost advantage.

Two things could be happening to change this:

The article compares the experience of large CPGs to that of big pharmaceutical companies.  Pharmaceutical companies have had to make acquisitions of smaller new firms who have carried out successful research into a new product.  However, there are very significant differences.  The amount of research and development needed to develop a new pharmaceutical product is far greater than for CPG businesses.  Also, CPG companies do not generally have patents that expire on their existing range of products in the same way.  They do have similarities though in their acquisition of smaller start-ups.

A strange coincidence is that two weeks after the article appeared one of the small start-ups discussed, the Dollar Shave Club was acquired by Unilever for $1 billion.  The difference between this acquisition and those made by large pharmaceutical companies is that Unilever are not buying (mainly) the research and developing or a patented product.  They are interested on a new business model;  Dollar Shave Club sells razors direct to consumers.

Another very significant trend is the acquisition of large CPG businesses by companies such as the Brazilian owned private equity company 3G, that bought Heinz and Kraft and has ruthlessly cut costs.  If, at the same time as this trend, huge advertising budgets are no longer seen to yield the returns they once did, further similar deals could be likely.

However, from our perspective there is still some good news for large CPG companies.  It is unlikely that consumers, who for decades have preferred a well-positioned branded offer that they know, will suddenly change their habits and make their own decisions, less influenced by outside ‘noise’ of advertising and other forms of marketing communication.  Or will they?