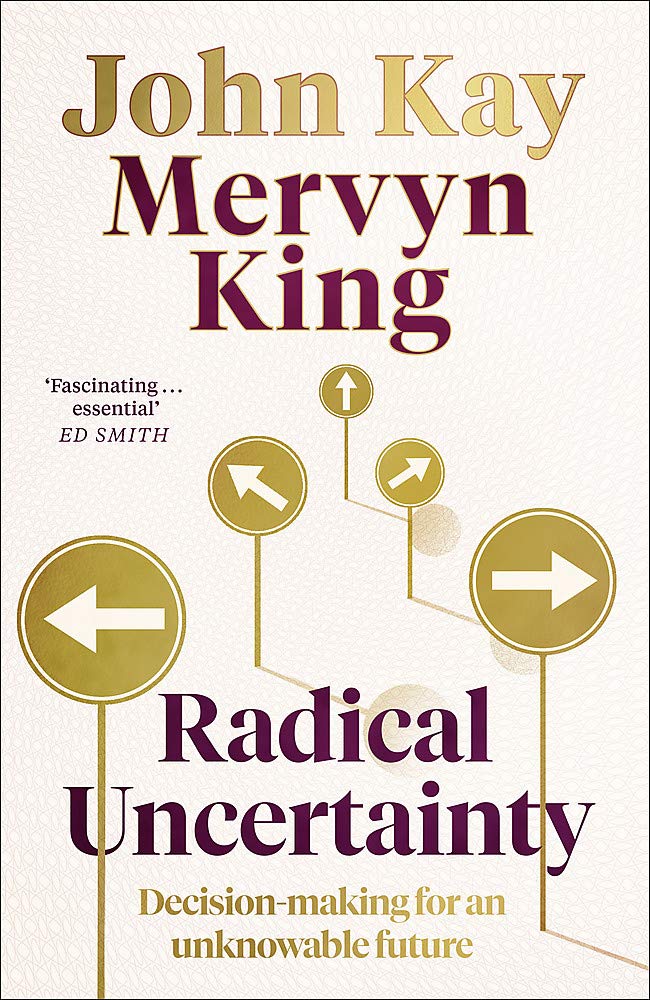 This book, written by two economists, draws on biography, history, mathematics, economics and philosophy to explore successful and unsuccessful methods of dealing with an unknowable future.

Economists and other business analysts often think in terms of probability.  This has led to a false understanding of our ability to make predictions.

Rather than trying to use mathematical techniques to try to predict what will happen we should adopt strategies that are robust to alternative futures and resilient to unpredictable events.

An early example in the book is the Global Financial Crisis (2007-8) including the collapse of Lehman Brothers.  This led to the most severe recession in the industrialised world since the 1930s.  Both of the authors each wrote, individually, a book about this but have a common view.

Markets in new financial instruments were supposed to ensure that risks were placed with people who were best able to bear them.  However, the crisis demonstrated that humans do not necessarily comprehend the consequences of their innovations.  In fact, the risks were placed with those who did not understand them.

Economists should recognise that their intellectual framework is in need of revision.  There has been a tendency to believe that all uncertainty can be measured in terms of probability, as in a game of chance.

Keynes argued that there are questions that we cannot sensibly assign probabilities to:

When I was studying economics at Cambridge in the 1970s I never heard anyone suggest that interest rates might fall to the low levels they are at today.

The authors argue that terms risk and uncertainty have become used in misleading ways.  The authors see the following distinction as more helpful.  Risk can be seen as uncertainty which can be measured, and a probability established (such as the chance of winning on a bet on ‘black’ or the number 23 in roulette).  Uncertainty, as Keynes argued, is where there is no scientific basis to form any calculable probability whatever.

The authors replace the terms risk and uncertainty with ‘resolvable’ and ‘radical’ uncertainty. Radical Uncertainty, the title of the book, cannot be described in probabilistic terms.

Although the book was completed before the Coronavirus pandemic, this seems to me a very good example of Radical Uncertainty.  What was the chance of a global pandemic like Coronavirus?  We just did not know, and we still do not know how it will develop.  Will there be a second peak of the infection?  Will a vaccine be found?  How many people develop immunity?  We just do not know.

The book is long and filled with numerous examples, one of which I will relay.  You don’t have to understand something to be able to do it.  The authors discuss David Beckman’s famous goal in last minutes of the crucial football match against Greece in 2001.  The authors view it as one of the finest goals in soccer history.  Dr Matt Carré an academic analysed the flight of the ball with sophisticated physics calculations.  Beckham would not be capable of doing the physics calculations, but then Dr Carré would not have been able to score the goal.

I enjoyed reading the book immensely.  It was certainly a good use of some of the extra free time that has been created by the lockdown.