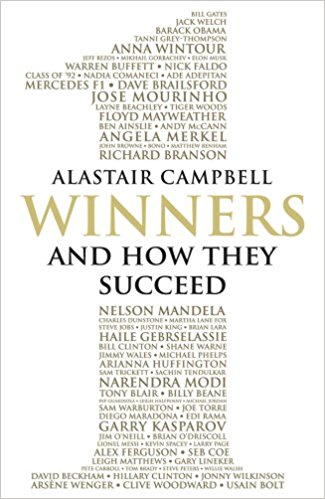 Alastair Campbell became well known in the UK as Tony Blair’s press advisor during the period before and during the Labour government from 1997 to 2007.

He has written a number of previous books, mainly focusing on his time in Downing Street. This new book is a departure and analyses what it is that leads to people becoming winners in the different fields of politics, sport and business.

At the start of the introduction Campbell identifies two great passions: politics and sport. He decided to also include business leaders in his analysis, which works well up to a point.

He has an approach to strategy, which he used in his role in politics, which transfers well to business. He labels it OST (objective, strategy, tactics). The objective is where you want to get to. The strategy is how you will get there. An example of how this was applied to the Labour party under Tony Blair helps us understand his thoughts.

He captures Labour’s approach as:
Objective: win.
Strategy: New Labour, New Britain.
Tactics: anything and everything that said we were a changed Labour party.

He is very critical of both businesses and politicians who confuse strategy and tactics. He argues that David Cameron does this frequently. For example he posed for pictures being pulled by huskies on an Arctic sledge and talked about leading the ‘greenest government ever’. However, he never made a single major speech about the environment as prime minister. The ides of the Big Society was dropped, Campbell claims, confirming that rather than being a strategy it was just a short term tactical ploy. While one would not expect the author to be a fan of the Conservative government that followed New Labour, he argues this case well.

This approach to strategy seems to transfer less well to sport. One of the people he analyses in a chapter to themselves in Jose Mourinho, the manager of Chelsea football club. He asks about strategy and tactics and receives an answer which is the opposite of what he has been arguing in his book. Mourinho says ‘the strategy is directed to a certain moment or a certain game. The tactic is something you develop over time….’ However, I wonder whether Mourinho was just being deliberately contrary, as he often is in his post-match interviews.

Many people have written books about how to achieve business success after many years of experience and /or research. Campbell’s decision to include business as one of the three areas of the book, an area where his knowledge is clearly weaker than the other two, reminded me of a well-known story told by Margaret Attwood the Booker prize winning author.

There are some examples of shallow analysis of business in the book. We have set out two below.

He claims that for Jack Welch at General Electric winning involved ensuring all the divisions in his company were number one or two in the market. He quotes John Browne, ex CEO of BP, as saying that a more nuanced approach is required. It is not clear what he means by this. The approach of General Electric was based on rigorous research of which businesses achieved above average levels of return and is still valid today. Of course, GE had to ensure that their businesses achieved a sustainable competitive advantage over their competitors; being number one or two was not enough on its own.

He uses Richard Branson of Virgin as an example of a winner in business a number of times. The lessons, both of success (Virgin Airways) and failure (Virgin Coke), are compelling. However he quotes Branson as claiming that Virgin have over three hundred planes now. They have around 40 active planes at present. Three hundred planes is more than British Airways have at present.

Campbell’s insights into the world of politics are fascinating along with some of those into sport. Some of the insights into business seem less valuable. However, the book is well written and I enjoyed reading it during a weekend I recently spent in Texas between courses I was running.